Local endurance rower Simon Johns will be attempting to row more than 280,000 metres in 24 hours as he challenges himself to break both the British and World indoor rowing records in the age 40-49 lightweight category in a one-off charity event starting on 13th November.

But the primary motivation for 45-year-old Johns isn’t about smashing records, it’s about raising money for two charities that are very close to his heart; the Priaulx Premature Baby Foundation and Bright Tights, the charity which supports families affected by gynaecological cancer.

‘I have some close rowing friends who have needed support from both charities over the years and want to do what I can to help,’ said Johns.

The Guernsey Rowing Club member is no stranger to long distance challenges and is the current world record holder with rowing partner James ‘Grinny’ Coquelin in the 24-hour tandem age 30-39 lightweight category.

‘I’ve had this monkey on my back to see what happens when I do it on my own,’ said Johns.

‘I’ve been thinking about it for a while but when the first lockdown came, I had a rowing machine in the lounge and started knocking out some big volumes and felt good.

‘Last year felt a bit too early to take on the challenge then we had the second lockdown and with the benefit of that extra time I now feel ready.’

Johns says it’s important the challenge comes at the end of the domestic rowing season when he still feels fit and strong but when there is also plenty of time to recover before the start of the next season.

‘Life dictates what you can and can’t do; there’s no manual on how to train for a 24-hour challenge.

‘I’m doing as much distance a week as I can.’

‘One of the biggest problems is fighting boredom during the training.’

He won’t have time to feel bored on the day though with a full team of helpers and supporters plus a list of rowing friends who will jump on an erg and row alongside him in shifts over the whole 24-hour period to keep him motivated.

‘I wouldn’t target it if I didn’t think it was possible, but a lot of things are going to have to fall into place on the day if I’m going to beat those records.’

Johns has worked for PraxisIFM for over ten years and they are the main sponsor of the event.

‘PraxisIFM support wellbeing throughout the office and have given me a lot of flexibility to train around my work.’

Ravenscroft and TPA are also support sponsors helping with the venue, marketing and fundraising.

‘I have an ambitious target of raising one thousand pounds for every hour I row so a total of £24,000 is what I’m aiming for,’ said Johns.

The challenge is due to finish at 12 noon on Sunday 14th, mid-way through the MS Rowathon so there should be plenty of supporters and rowers there to help encourage him over the line.

Supporters are welcome at the event which is taking place at the Indoor Cricket Centre between noon on Saturday 13th and noon on Sunday 14thNovember. Donations can also be made via the Row 24 Giving page 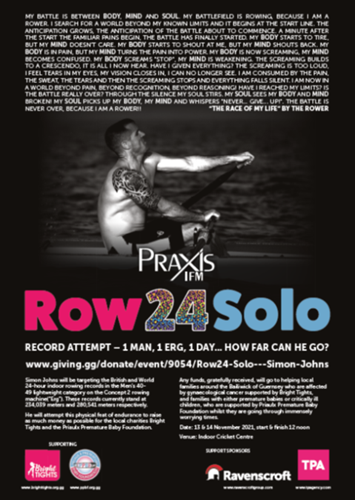